The first country in South-America where circus arts has been included into the national registry of the Intangible Cultural Heritage.

In Europe the Netherlands, Hungary and Finland reached already this highly important recognition.

The possibility to work on a multinational application became more realistic.” 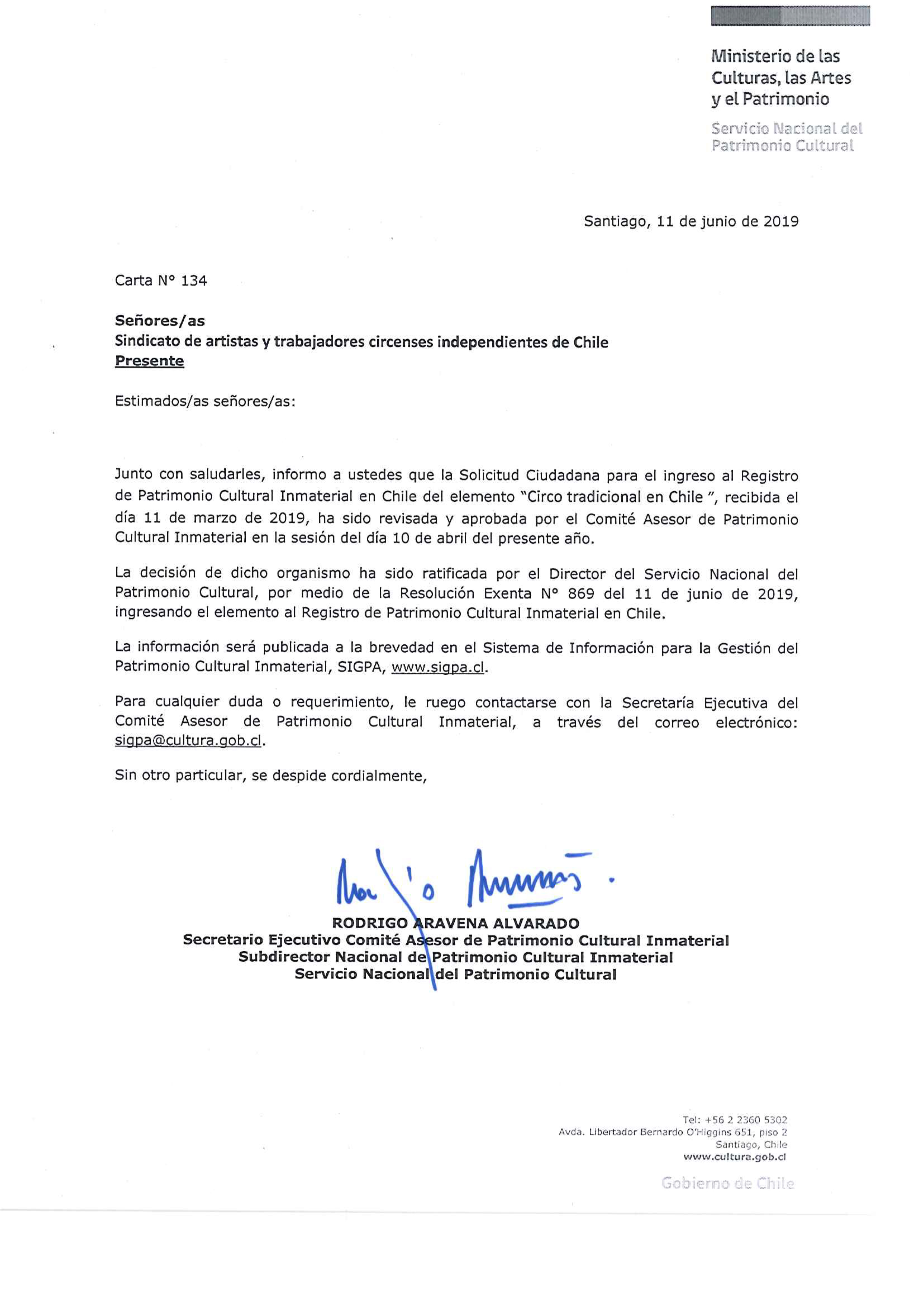 On July 25, 2019, the anniversary of the founding of the Circus Syndicate of Chile, (the oldest existing union in the country, founded in 1935) the Chilean circus received extraordinary news. After several years of arduous work, the efforts of the national circus organizations (Circus Syndicate of Chile and Emarcich, meetings with different government entities and the constant work of many people linked to the Chilean circus, the Ministry of Culture confirmed that the Chilean Traditional Circus had entered the National Registry of Intangible Cultural Heritage. This nomination brings the Chilean traditional circus a step away from being part of the national  ICH Inventory and furthers the world circus closer to its goal of international recognition as an Intangible Cultural Heritage with UNESCO.

It is worth reflecting on the implications of this appointment. The declaration as Intangible Cultural Heritage recognizes one of the oldest and most loved forms of entertainment in our country. However, above all, it acknowledges its heritage, as an expression of Chilean popular culture, a complex reality where all social classes intersect and converge in profound identifications. Popular culture is the array of actors, spaces, values and social engagements, which endures, with extraordinary tenacity, through cultural traditions: popular religiosity, folklore, folk medicine, the magical worldview of reality, popular wisdom, sayings, and of course, circuses.

The existence and resilience of more than 100 circuses that roam the national territory is evidence of the deep-rootedness with Chilean people, and the role it has played in forging the identity of Chileans. Indeed, the circus has not only served to unite localities and communities throughout the vast and rugged Chilean geography but has also had the power of transforming the spaces that surround them. Places that are often within the limits of abandonment, fragmented by natural or social catastrophes. The circus changes the territory, creating a familiar and intimate climate, whose transience grants a vigorous, fresh air that allows experiencing the environment under a renewed light.

This recognition of the patrimonial value of the circus induces its safeguard, and provides essential guidelines for the country’s municipalities support and upkeep the Chilean circus. However, most notably, it allows circus artists to recognize and become aware, not only of their art but also of their condition as bearers of knowledge, expressions, and techniques perpetuating this tradition, culture and particular way of life, generation to generation.

Since its origins, the Chilean circus has been founded on diversity. Gestated in the country’s nineteenth-century Casas de Volatines, Chilean circuses were nourished by foreign circuses that came from all over the world with their artists, animals, and infrastructure. It is difficult to specify the circus: a melting pot of cultures, with the function of “bringing the world to the world,” celebrating plurality and individuality, and which, at the same time, develops locally obeying guidelines, customs, preferences, and local significance. They collect the people’s yearnings, fears, concerns, and values, and return it while reinterpreting and redefining the local identity. Circuses of yesteryear forged close ties with folklorists, “payadores” and popular poets giving rise to the characteristic Chilean Circus with Second Part: a circus show with a first part of traditional circus numbers, and a second part of musical numbers. Sometimes the second part could be a pantomime, whereby clowns and the acrobatic cast of the circus would represent epic configurations, popular narratives or incarnations of historical episodes. Not only did circuses become a public instructor of some of the country’s most significant historical feats, but the Chilean circus also served to tell a universal story, endow meaning and forge a collective identity among the people.

As a constellation of arts, it is the only stage where the artist not only represents his own role but inherently configures the whole oeuvre. Comedians and acrobats, musicians and animals articulate in the circus through the deep bond achieved with the viewer. Indeed, the viewer becomes a protagonist, fascinated by a beautiful and well-executed number, and also by the deep admiration and discovery of the hidden hero in man, who is well aware that each representation It may be the last. The circus is the ultimate expression of “the truth.” There are no repetitions; there are no second chances, and there are no special effects. The circus shows us the powers of the body, speaks of life, but it reminds us that these powers are ephemeral, where death constantly roams and does not forgive mediocrity.

The circus is the transgression towards what is not possible. And the reward is the surprise that lies in the unbelievable, the unexpected and the phenomenal. The applause is also for the spectator, who always has fatality in mind, and is continually about to discover, along with the artist, a new possibility on the limits of the body. The circus is the quest for the extraordinary, the art of excess and exuberance, but also, the art of prudence and discipline. It appeals to emotions and sensations that range from laughter to chills, without compromising the harmony of the show.

In this context emerges the clown. And in the Chilean circus, if there are no clowns, there is no circus. Famous duos or trios of clowns have delighted generations in Chile through a format where the interaction between the August and the Whiteface clowns, or, as they are known in Chile, the “Tony” and the “Clon.” They are opposite, but they complement each other. It is the duality of the fool and clumsy in front of the severe and intelligent where they represent in a dialogue of words and knockabouts, and where the fool ends up being the cunning one and the clever one is mocked. Instead of two different characters, they represent two roles that dialogue and interact, forming a “clownesque unit.” During the ’60s, aware of the clowns’ appeal, the famous Tony Caluga, patriarch of several generations of important clowns (the Clan Caluga), staged a show consisting exclusively of clowns: the “Circus of the Twenty Clowns.” Even today beautiful circuses in the south of the country boast over ten clowns on stage, of all colors, shapes, and sizes, which, in delirious gags, submerge the patrons in a surprising and disconcerting universe. Also, they work solo. With less makeup than their ancestors, contemporary clowns like El Matute, or El Pastelito deeply relate with the audience, using devices, musical instruments, an impressive vocalization, and a bizarre corporality. Battling with brooms, balloons, and their clumsiness, these clowns play with the humor that surrounds the failure and the difficulty of acrobatics. Failure is the crucial piece of all clown material, from where, through its metaphors, humanity emerges, and reality is transcribed. The clown is more than jokes and jests; he is our reflection, hiding behind his clumsiness. He is the intellectual acrobat of the circus, who, with hesitation, doubt, equivocation, puns, apparent stupidity, and critical spirit, forces us to connect with our failure. “And so the clown comforts us and relieves us of being the way we are, of not being able to be otherwise” (María Zambrano, 1957).

The circus is a social experience that goes beyond the artistic expression of the show but is located between the borders of art and life. So in this sense, the circus is a carnival. It is the carnival subjected to processes, techniques, discipline, and representation, which makes it an art. It is a carnival no longer limited to time, but bounded in space: in the magic of the circle, and under the transience of the Big Top. Nothing is what it seems inside the circus: people fly, with grace hold suspended in the air many gadgets; balls, knives or torches, and the hierarchies disappear at the mercy of the comic insolence and contempt of clowns. The people who participate in it are simultaneously actors and audience. And, as the festive laughter of the carnival and the circus is also directed against those who laugh, the audience is both object and subject of laughter. And laughter leads us to reconfigure our existence, as a form of change and liberation against established reality. From the circus comes the tale of a people, as an authentic expression of their ways of life, their concerns, and desires, and is rooted in the heart of social groups. It is particular and local, and today the Chilean circus has been acknowledged as Intangible Cultural Heritage of the country. However, we must not lose sight of the fact that the circus transcends particularity, being an expression of a universal intangible cultural heritage, which belongs, gathers and unites all of humanity.